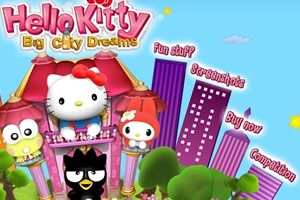 The game is about Hello Kitty who leaves the hometown Sanrio Town and reach The Big City, to start her indipendent life. At the beginning of the game Kitty is on the bottom floor if a building, her dream is to reach to top floor on a penthouse. In the meantime she needs to know friends and earn friendship points in order to advance in the game.

Today Hello Kitty: Big City Dreams has had three releases depending on the country where the game has been launched. The first in the United States on November 11, 2008, the second one in United Kingdom on March 30, 2009, the last one in Australia on October 14, 2010. Each edition does not differs  from the others regarding contents.

Since its first release in 2008, Hello Kitty: Big City Dreams has been played by girls of all age and nationality, thanks also to the fact the Hello Kitty is worldwide known and appreciated.

Who is this game for? Hello Kitty: Big City Dreams has been thought for girls aged more than 3, also if the game can be more enjoyable to girls aged 6-11 , as there are some mini games within the main game (16 mini games in total) which needs to be completed in order to gain friendship points (which are the main goal of the game) and to finish the game itself.